The question as to how to define a share is one that even many investors find puzzling, and while instinctively it may seem obvious as to what a share is, expressing the concept in words is something most investors find tricky. As a commodity that is traded openly, shares are just like any other – they have a price that varies in accordance with supply and demand, and as such should be bought when demand look set to rise and sold when supply looks set to outstrip demand. But getting down to the nitty-gritty of what a share actually is takes an analysis that is somewhat more complicated. 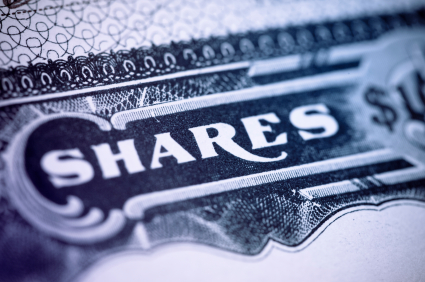 A share, at its lowest level, is a share in the profits of the company to which it relates. It is a percentage of ownership in the company, relative to the size of the holding and the total available share capital, and as such, it provides the owner with a proportional right to the declared profits of the business. In this sense, shares provide the bearer with a yield whenever dividends (i.e. payments to shareholders) are issued. Regardless of whether you’re a long-term investor who has held the same shares for decades or you purchase on the day of a dividend declaration, the bearer of the share is entitled to a per-share payment from the dividend pot, thus share investments provide an ongoing return in exchange for the capital invested.

How Shares are Priced

The price of a share is determined by its notional value, plus a premium in respect of the actual value of that right to ownership. Thus, a $1 share may actually sell for $5, if it is assumed that the value of that proportion of ownership in the company reflects that price. With pricing stipulated exclusively by supply and demand, it is therefore possible for shares to be both under and over priced, depending on the dynamics of the market and the levels of optimism shown by investors at a given point.

But beyond the right to a stake in the company’s profits, shares also present more complex rights and responsibilities, upon which shareholders may or may not act. The most obvious of these rights is the right to vote on company decisions, and to take an active role in the election of the organisation’s management.

If a shareholder feels the current board are not fit to serve the company’s best interests (or even their own best interests as a shareholder), they have the ability to vote in a replacement board, weighted in respect of their holding. Even as minority shareholders, there are protections afforded in law to ensure fair treatment and to give the shareholders their right to a say in company management.

Of course, it goes without saying that the majority of shareholders are more concerned about the value of their shares than the day to day running of the organisation, and speculators seldom delve deeper to exercise their correlative rights. However, in the strict legal sense of the definition of a share, ownership brings with it the burden to exercise control and influence over the direction of the company for the good of the business, other shareholders and the variety of stakeholders in the company’s business.

Shares are essentially packages of disparate rights, but more often than not they are used primarily as a tool for trading and speculating on price fluctuations.

Before trading shares it’s important to understand who traders shares and why they trade them.

History of Shares and Interesting Facts

Shares have been around in various forms for thousands of years, serving as the primary mechanism through which ownership in companies and entities can be divided, and the means by which new investors can be welcomed into the fold. While of course, the concept of shares and the specific legal setup has become much more refined and sophisticated with time, shares in principle have existed since the times of ancient Rome, as a cornerstone of commerce and early corporate finance.

The Romans developed mechanisms akin to what we would consider to be a company today, with the backing of the authorities, to carry out specific purposes or to deliver certain projects. These involved the first known classification of shareholders, who were involved to help provide capital for the projects involved. This early construct was closely aligned with the state, and only began to develop its own legal identity and distinct legal personality after influence from the early German thinking on corporate structure.

After its early introduction, the company was developed considerably across Europe by the Church and the Canon Law, which laid down some fundamental legal points as we consider them today. For the first time, the company was a personality distinct from its member, which would therefore survive in perpetuity beyond the death of those involved, and the basic principles of agency law began to flesh out. Where the Church first tread, so charities and other public organisations followed, adopting the Church’s model of business structure to develop the entity as we’ve come to know it.

Packaging company Stora Enso, still in existence today, is derived from the oldest known limited company, and issued the first recorded example of a share certificate in 1288. By this point, the share was a relatively understood albeit basic legal right, and one that was fundamental in helping expand the growth of commerce throughout the middle ages.

By the early 17th century, the first signs of organised stock trading activity in Europe were evident, thanks to the Dutch East India Company, which issued shares to the public for the first time in Amsterdam in order to fund expeditions and activities in Asia. This first issue was pivotal in providing the Dutch East India Company with the capital to fuel its growth into one of the world’s largest companies of its time, and one of the most influential on a multinational level.

But it was with the advent of the Joint Stock Corporation Act in the UK in 1844 that companies and shares really started to take shape. For the first time, the liability of companies was limited, and parties could hold a joint stock in companies, divisible by recognisable shares. This, followed by three successive Companies Acts taking us up to 2006 helped transform the economy of the UK and the rest of the world, and has given us the multi-trillion capitalisations of global companies we’re used to seeing today.

Shares have had a long and interesting history, and their story is one that is likely to continue to change over time. While many of the sweeping changes have already taken place, the future for shares and share trading looks set to be increasingly shaped by technology, as the markets continue to embrace the systemic advancements that improve share dealing efficiency and drive down cost.