Spread Betting vs CFD – What Is Better?

Perhaps CFDs’ closest relative in terms of investment instruments would have to be spread betting. Technically and legally, they have a number of key distinctions which must be drawn in order to better understand how each is used, but in practicality they have much the same function with just a few key differentials. While both are highly leveraged trading opportunities, they are considered to be quite different in the eyes of most investors, and there may be situations that are more or less suited to spread betting over CFDs, depending on the investment circumstances at hand.

CFDs and spread betting are often compared directly because they have a number of key similarities – namely that both are highly leveraged and can as a result return significant sums from incremental market movements. But while they may have some practical similarities, they also have key differences. Spread betting for many professional traders has something of a stigma attached – it is considered little more than a gambling activity. While that’s not strictly the case, spread betting does bear little resemblance to the underlying market price, whereas CFDs are at least more notionally traded on the basis of underlying prices.

While spread betting is seen as an extra-market transaction, CFDs are seen as part of the market and more of a financial transaction than financial spread betting. While there are practical differences, both instruments are of course useful for investing in a range of markets with highly leveraged positions. 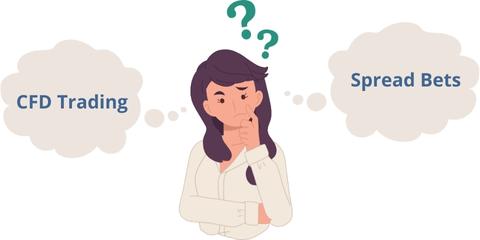 Spread betting is technically thought of as a gambling activity. Markets are quoted with spreads showing buy and sell prices, with the profit lying in the difference between the market price at the close of the trade and the buy/sell price when you took the position, multiplied by the per point stake amount you’ve set. While a slightly different slant on trading than CFDs, or say speculating in shares, spread betting in practice works as a highly leveraged, highly tax-efficient instrument that is capable of delivering returns of the same extent as CFDs. With each point movement in your favour, your original stake is multiplied one more time, so a 10 point movements = 10x your original stake. The same is also true on the reverse side of the coin, with losses being unlimited multiples depending on how far the position has moved since you entered the trade. Thus for minimal capital exposure, traders can realise both significant gains and losses with spread betting, all with the added advantage of being completely tax free in most cases. While CFDs can in some circumstances provide traders with more hefty returns, it would be a foolish trader to write off spread betting as an effective way of generating an efficient capital return.

Spread betting is a fast growing area of financial trading, with estimates showing that the UK industry now supports over 1 million trading accounts. And there’s a very good reason for that. As financial instruments go, spread betting is probably amongst the easiest to understand in practice, because it is visually so simple. But the real advantages of spread betting are far more than superficial – it’s actually an effective way to trade a number of markets in a highly leveraged, cost effective way. Unfunded leverage is one of the first major draws, possible because the leverage takes a slightly different form than with, say, CFDs. Instead of inflating the size of the position, the leverage is built into the DNA of the spread betting transaction through the multiples effect, where stakes are multiplied.

Another key reason why traders opt to spread bet is because of the tax-free nature of spread betting as a trading style. Because it is regulated as a gambling activity by the tax authorities, you can expect to be exempt from Capital Gains tax and Stamp Duty, (although income tax will be payable by those that earn their sole income from spread betting). This is a major draw, particularly for those engaging in larger individual transactions, because it can deliver a major cash saving on other, less tax-efficient investments.

Advantages Of Spread Betting vs CFDs

Tax Efficiency: spread betting is considerably more tax efficient than trading CFDs, because of one crucial distinction in the way they are considered by the tax authorities in the UK. Whereas CFDs give rise to Capital Gains tax on any profits made, spread betting positions are almost always entirely tax free, with no liability to CGT in issue. This provides traders who opt for spread betting with an advantage over the most heavily taxed CFD traders, thus the difference this can make to your trading fortunes can be pretty significant.

No Commission: spread betting positions charge no commission, unlike CFD positions which are charged at a percentage of the total transaction cost. The only cost involved in spread betting is wrapped up in the spread which represents the commission portion, and has no relation to the size of the transaction or the eventual gains you will realise. Its simply (usually) just a couple of points, and therefore tends to work out cheaper than CFD commission in the majority of cases.

Trade in GBP (or currency of your choice £/$/€): spread betting will always be denominated in your base currency, because that is the currency through which all your trading activity takes place. Your spread betting account will be displayed in pounds, your transactions will be ‘bets’ placed in pounds, and the earnings (and losses) will be in pounds. When you are trading exchange-based CFDs, these will be traded in the relevant base currency of the market on which you are buying/selling, and as a result your positions will be subject to the further exposure to currency fluctuations, which can work some way towards offsetting any profits realised on the position at the point at which you liquidate your foreign currency positions.

Advantages Of CFDs vs Spread Betting

Lower Spreads: to account for the lack of commission, the spreads offered in spread betting are often comparatively wider than the same picture in CFD markets, which effectively handicaps the trader on whichever side of the trade he falls. Because of the width between the buy and sell price, long positions have to go longer and short positions have to go shorter in order to generate the same levels of return. Particularly when you’re looking at trading opportunities that are pretty minimal, this can be a serious disadvantage to spread betting over CFDs.

Hedging: Contracts For Difference are naturally better for hedging as you can have Direct Market Access (DMA) and any potential losses can be offset against profits for Capital Gain Tax. Imagine, you have a share portfolio you want to protect during an economic turmoil, CFDs allow you to shorten the shares you want to protect and then pay tax only on the total profit you make.

More Price Transparency: because CFDs track the futures and often even the underlying markets directly, it’s easy to see where CFD pricing comes from. Naturally, the prices are adjusted to weigh more in favour of the broker, by taking into account wider factors that are assumed not to be factored in by the market, but at least the prices seem more reasonable and more akin to underlying prices than comparative spreads, which can often look markedly different from the underlying price thus making it more difficult to forecast with any accuracy market performance.

CFDs are the ones which do not have any expiry date, and as they are a margined product a daily funding charge is levied on the account when the long position is held overnight. When the positions are opened and closed on the same day there is no interest charged on the account. And with CFDs there is an interest rebate on the short positions. But with financial spread betting there is an expiry date as the position is only open till the time the contract is expired or closed.

The CFDs are also eligible for capital gains tax whereas the gains that one gets from financial spread betting are tax free. The losses that one incurs on the spread bets are not tax deductible, whereas the losses that are incurred on the CFD trading can be offset by the profits that are made in future. The margin in CFD trading is calculated as a percentage of the exposure, whereas the margin in spread bets is calculated by multiplying the stakes by the Notional Trading Requirement.

Another point of difference between CFDs and spread betting is the way the trades in the two are placed. The reason for this is that investors of CFDs will trade a particular number of shares as are traded in the conventional trading of shares. On the other hand in spread betting the trader wagers a particular amount of money for one point in any of the given markets.

The premium on the spread bets is built into the price. In spread betting the firm will make money after charging a bid-offer spread which is wider than the ones available in the market, whereas in CFD trading the firm will most often charge a fixed percentage of commission on each of the trades.