Difference Between Binary Bets And Other Trading Options

Difference Between Floating And Fixed Binaries 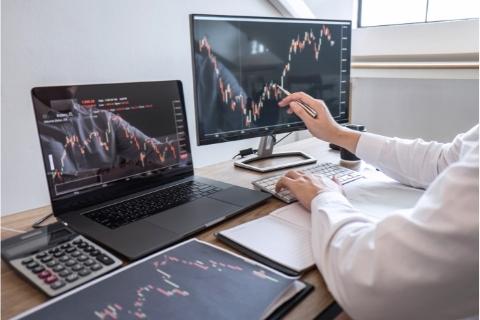 Binary bets can be largely broken down into two categories, and the distinction is a thoroughly important one for any binaries trader to understand. Knowing whether or not you’re trading a floating or fixed binary is an essential ingredient to successful trading, because of the different impact that each one will have on your trading position and ultimately your bottom line. While the more common of the two is the floating binary, it is nevertheless essential that you understand the difference to make sure you don’t get caught out when it comes to brass tacks.

The distinction between floating and fixed binaries lies in the component of the transaction that is flexible. In a floating binary, prices (i.e. spreads) are consistently re-quoted throughout the day, while the end goal (in handicap binaries) remains a constant component. For example, a floating binary on the FTSE closing 10 points up might start the day at 53-58, then it might drop to 51-56, before rising to 70-75 – while the spreads are ‘floating’, the 10 points criteria remains a fixed component to the trade.

This means that traders are in the fortunate position of being able to close out their positions early, by opening reversed trades to the same extent as open positions, thus they are able to lock in small profits as they arise without necessarily having to wait until the end of the trading day.

By contrast, in the example of fixed binaries, the floating component is actually the target rate – i.e. the 10 points in the above example. In this sense, the spreads will stay the same, but the end goal will vary over time to represent a more realistic goal in relation to the odds on offer. Thus it is the odds that are fixed in the example of fixed binaries. This has the effect of locking traders in to their binary bets until they are settled, either up or down, and thus there is no way in which a trader can close out his position early.

Floating binaries are by far the more common of the two, and almost in fact the default option. However, it’s important nevertheless to be aware of the existence of fixed binaries, and to understand exactly how they differ to ensure you’re prepared for any eventuality.

Difference Between Binaries And Spread Betting

Perhaps the main difference between binaries and spread betting is the limitation effect of a binary transaction. Binaries are either up or down, with no half measures – hence the name. They are truly binary, insofar as a winning position, no matter how slight, is considered as a good a win as any other, with the reverse being true of any losses in the market. Contrast that with spread betting, where there are theoretically no limits on upside gain or downside losses, and where a 100-point market gain is 100 times better than a 1-point gain.

Aside from their distinctions, binaries and spread betting have significant similarities, mainly the fact that both quote spreads on markets, both are treated favourably for tax purposes, and both facilitate an in-built leverage component that saves on financing costs. In this vein, binary betting and spread betting share many of the same advantages over other forms of trading, making them a natural pairing for investors looking to capitalize on market movements.

Although both disciplines are similar to one another, they each have their own distinctions that require specific treatment, and thereby lend themselves each to different trading scenarios. By developing a working knowledge of both, you will give yourself an edge over the bulk of spread betting traders, and find yourself better equipped to deal with the various trading conditions that present themselves, leading to a more flexible and potentially more lucrative trading career.

Difference Between Binary Bets And CFDs

Binary betting and contracts for difference are similarly leveraged products, and are often offered by the same brokers as part of their online service offering. Beyond that they differ starkly in the options they open up for traders. Contracts for difference present the ability to speculate on asset prices over the longer term with uncapped, leveraged transactions, while binary betting is more restricted in terms of the winnings it can deliver but is also more suited to shorter-term trading.

One of the key advantages of binaries over contracts for difference lies in their tax treatment. Contracts for difference, while exempt from Stamp Duty which might otherwise be payable in directly acquiring underlying assets, are still liability to Capital Gains Tax on their disposal. Binary bets, on the other hand, are taxed as a gambling product rather than an investment product, which allows traders to save around 20% on the tax costs of their transaction – a considerable saving in the world of trading, where every pound, and every PIP really counts.

Another distinction lies in the nature of the leverage each affords to the trader. Binary betting is leveraged by construction, in that a one percentage favourable move in the market can lead to multiple times your stake in return, whereas CFDs are leveraged on a financed basis – i.e., the leverage is derived foremostly from the broker, which in turn yields an interest cost which must be borne by any trading profits. This can eat into the profit portion of a transaction, and can at times be the difference between a trading profit and a trading loss.

That said, CFDs do also have a number of advantages over binaries, namely the scope for uncapped upside gains with less of an upfront risk. Because binaries present a stable and fixed earnings opportunity, they are naturally less potentially lucrative than CFDs, but this is also balanced with the limit on losses present in binaries, and deciding between the two types of trading is very much a case of weighing up the pros and cons in light of the given trading scenario.

Nevertheless, both binaries and CFDs provide traders with useful features which, when combined as part of a wider trading portfolio, give the trader a significant degree of flexibility and an unparalleled ability to capitalize on trading opportunities as they present.

Difference Between Bets And Other Derivatives

Derivatives trading has earned itself a reputation as a particularly risky form of trading that harbours the potential for both significant gains and heavy losses through the interplay of trading and leverage. Likewise, binary betting still carries a reputation as being a shallow, gimmicky product with little practical advantage. In waylaying the prejudices and anxieties surrounding both trading mediums, it is apparent that both binaries and derivatives have a role to play, and understanding how to use both to optimum effect is a more important trading skill than approaching with a closed mind.

Derivatives are instruments that give rise to rights in assets, and are traded as secondary assets on exchanges between different traders. In contrast, binaries are traded off-exchange between the trader and his broker, and positions use asset or market price as an index only on which the trading outcome will be determined (i.e. the trader acquires no rights in respect of the markets and assets he trades). Thus, the two are largely distinct methods of trading, but have their own distinct appeal in one common area: leverage.

Leverage is the ability to scale up earnings from a trade such that, for example, a 1% market rise delivers a proportionately larger return for the trader. With derivatives, this is achieved largely through borrowing from the broker, enabling the trader to minimize his upfront exposure to a position while being able to amplify small market gains into larger incremental returns.

In binaries, this leverage is more indirect, insofar as the transaction returns a multiple of the stake. Essentially, this means that either a 1% movement or a 1000% movement will deliver the same return, but nonetheless this can provide a leveraged return in comparison to trading the same asset pound for pound.

Perhaps the main selling point of binaries in consideration of derivatives is that they are much simpler to price, and provide a guaranteed lower limit to loss exposure. Highly successful traders have been literally ruined by wayward derivatives positions, and it is essential for traders to constantly keep their downward exposure in check. Contrasted with binaries, where the downside is immediately obvious and static, the certainty afforded over derivatives makes binaries a popular choice for newer traders, and a less risky choice for the more experienced trader looking for a quick way to capitalize on forecast market movements.